Below is the tweet I sent to Chevrolet SA asking when we can expect the Chevy Volt plug-in hybrid and the Chevy Bolt EV, in South Africa. 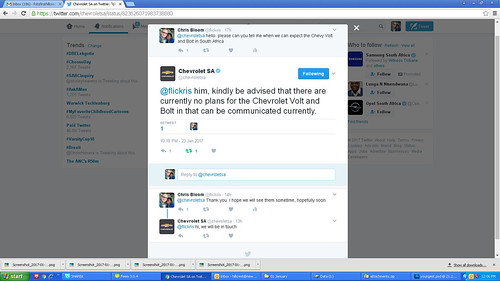 
@chevroletsa hello. please can you tell me when we can expect the Chevy Volt and Bolt in South Africa


@flickris him, kindly be advised that there are currently no plans for the Chevrolet Volt and Bolt in that can be communicated currently.


@chevroletsa Thank you. I hope we will see them sometime, hopefully soon

And what I think was an optimistic response to that tweet:


@flickris hi, we will be in touch

I think this sounds hopeful that we may see either or both of these cars in South Africa sometime in the future.  I'm happy they did finally respond on Twitter after ignoring several queries I made on Facebook.

If you're also wanting to see these vehicles in South Africa, please let them know via their web site, their Facebook page or like I did send them a Tweet.