The Enfield 8000 was a small two seat electric car car manufactured by Enfield Automotive on the Isle of Wight in the United Kingdom between 1973-1977. The Enfield 8000 had a 6kw electric motor powered by lead acid batteries for a top speed of 77kmh and a maximum range of 64km. It also had a form of regenerative braking.

An example of the Enfield 8000 was brought to South Africa by Haggie Rand in 1974 to promote and expand a chloride battery project. In 1992 it came into the ownership of Mr B. Pollock to
promote the environmental aspect of the electric car. Eskom acquired it in 1994 to start The Electric Vehicle Project. They then donated it to the James Hall Museum of Transport in Johannesburg where it sits on display to this day. 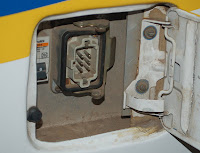 I remember back in the early 1990's reading in a newspaper or seeing something on television about Eskom acquiring an electric car. My memory convinced me it was a Honda Civic but I searched a while back for an electric Honda Civic from the 90's without any luck. Now finally I realise it was quite obviously the Enfield 8000 I remember hearing about. An example of how malleable the human memory can be.