How much range in enough range (for an electric car in South Africa)?

Recently I wrote a reply to another electric car blog's Facebook post that basically asked the same question. Not owning an electric vehicle (yet) I tried to think what sort of range I'd need for the kind of journeys I do.

Like the US and unlike much of Western Europe, distances between major centres in South Africa are quite big, so do we all need long range electric vehicles? At the moment there are only two, relatively short range, fully electric cars on sale in South Africa, the 24kwh Nissan Leaf and the BMW i3. The Leaf has a range of 135km and the i3 can go up to 160km.

Most of my driving is commuting to and from work as well as dropping my daughter at school and my wife at work in the morning. This daily round trip is about 35km, well within the range of even the lowest range all electric vehicles.

Occasionally I have to take a trip to another branch, coincidentally they're all about 50 kms away from the branch where I work, so that would add another 100km to my daily mileage. That's right on the limit of the Nissan Leafs range but within that of the i3. If I had a place to charge at work, which at the moment there isn't, it would be within the range of the Leaf as well. Also once a month I go to camera club after work, that is about another 40 kms so would be well within the range of a single charge on the Leaf. Most other evening driving is relatively short trips, probably 5-10km at the most.

Weekend journeys again are also mostly less than 100km a day. A place down the coast we like to go away to for weekends is 98kms away so that would also be easy to achieve on a single charge in the Leaf. A recent weekend trip to a friends wedding was 82kms each way. 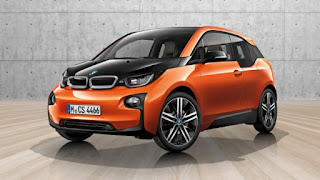 The nearest city to where I stay (apart from Durban which is 20km away) is Pietermaritzburg which is a 70km drive each way. Probably a handful of kilometres too far for the 24Kwh Leaf that is currently on sale in South Africa. Of course a short charge at the destination would ensure enough juice for the return trip.

The only trip I've done in recent years that would be well beyond the range of the Leaf and/or i3 is a journey to Johannesburg a few years back. The 600km's wouldn't really be practical even if there were fast chargers on route at convenient locations. A Leaf would need at least four stops and with a fast charger about 30 minutes at each stop to fully charge. If you were planning on doing lots of journeys this distance, then a Chevy Bolt with a range of over 300km would be suitable, you'd just need one stop to charge at about half distance on the way to Johannesburg from Durban. Sadly the Bolt isn't available in South Africa yet.

The last time I did go to Johannesburg I didn't actually use my car while I was there as the person I was a guest of was kind enough to ferry me around, so I could have actually just taken a bus or plane and left my car at home. The fuel savings I'd make with an electric car would more than pay for the use of a hire car for such infrequent trips.

So would one of the short range electric vehicles on sale in South Africa right now, be adequate for my motoring needs? I think yes. Maybe I would be pushing the edge of the range of a Leaf on occasion but the i3 would cope with pretty much handle everything but the very occasional long journey and as I mentioned in the last paragraph, there are always alternative options to your own car.