Until very recently I've been a bit dismissive about electric car conversions, where a conventional fossil fueled vehicle is changed to battery electric power. I used to think cars converted to electric power ended up looking a bit like some sort of Heath Robinson contraption. I imagined loose wiring hanging from the dashboard, a boot full of batteries, extra gauges bolted on to the dashboard and holes where the defunct gauges for the petrol or diesel engine were, no doubt accompanied by the rattle of loose fitting parts. I also presumed without the cutting edge engineering of a firm like Tesla, the range of a converted EV would be pitiful.

Happily, the more I hear reports and see videos of EV conversions, the more I'm realising that the majority of conversion jobs are very professional and offer comparative range and performance to a new fully electric vehicle. An example of this is this recent video by James Cooke. A Porsche 911 Targa converted to electricity by Electric Classic Cars. It's an immaculate vehicle and conversion, a totally professional job. You can view the video below.
In South Africa there is a company called Freedom Won doing electric car conversions. I wrote an article about them last week. Among their conversions have been the conversion of game viewing Landrovers and boats in Chobe Game Reserve to electric.

Another conversion from Freedom Won is a Fiat 500 which has a 23kWh battery which gives it a 200km range. I found some images of it on their Twitter account. Again, the conversion appears to be a very professional and neat job. The price of the conversion of the Fiat 500 was R250,000. It is a lot of money but if you have a car that you're happy with but you want to drive an electric car, then it is still half the price of the cheapest electric vehicle on sale in South Africa to convert it. 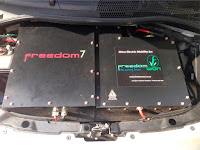 Freedom Won have a inquiry form where you can request a quote for getting your own car converted. They mention that one of the potential markets for conversions is minibus taxis. I think this is a great idea. The biggest influence on taxi fares is the petrol price, electric power would cost less than a fifth of what petrol is costing to power the vehicles. Imagine if the running costs could be cut by 80%, the taxi owners would save a fortune. Charging points could be installed at taxi ranks and the taxis could charge while waiting to fill up with passengers and also during the off-peak periods when they're not so busy.

Electric conversions would probably be more popular in some regions over others. Most likely more popular inland than at the coast. At the coast car bodies tend to corrode more due to the humidity and salt in the air from the sea. On the Highveld the air is dry and body corrosion isn't a worry. It makes no sense to convert a car to electric if the body is already rotten.

The biggest market for electric conversions could be vintage or rare cars. Cars that their owners have become attached to but due to age, they are becoming harder to find parts for and maintain. With an electric conversion a classic car could carry on running cheaply and indefinitely, with no worrying of where to find replacement engine parts when it next breaks down. Also there must be plenty of vintage cars where the bodywork is fine but the motor isn't working. Electricity could get these vehicles back on the road. We could see many more classic and vintage cars back on the road, old cars given a new lease of life and more people able to afford to run an old classic.

As an example of what a classic conversion could be, one of my dream cars is a Porsche 928. They can be found relatively cheap, however maintenance of the big V8 motor is horrendously expensive. Just changing the timing belt requires the removal of the whole engine. Of course a 5 litre V8 also tends to be a bit costly at the petrol pump. With an electric conversion you could still have the same driving experience and the same, if not better acceleration. Once the conversion is done, I'd have a classic car that will cost next to nothing to run and need virtually no maintenance. As I write this there is a Porsche 928 for sale on Gumtree for R33,500, the body and interior are in sound condition but it's not running. A perfect candidate for an electric conversion. As for now,it will remain my dream.
Posted by The Swirl Guy at 5:09 PM