Versus SA Autogas, has already converted more than 100 minibus taxis. The company installs the required equipment, including an 80-litre LPG tank, in the taxis and turns them into hybrid vehicles that run on both LPG and petrol. 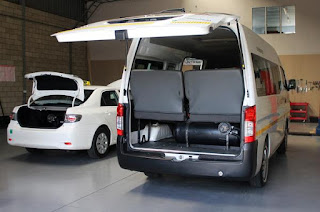 According to a taxi owner/driver Flyman Stanley there is some considerable saving over using petrol.


Stanley said he used to spend approximately R850 a day for a full tank of petrol, which is 50 litres, but now spends about R740 to fill up. “I can go about two days driving on a full tank of LPG, whereas in the past I had to fill up with petrol every day,"

Obviously conversion to LPG is a sensible option for the minibus taxi industry, where the biggest cost is fuel. Looking at these figures it appears the running cost of LPG is roughly 40% of that of petrol. It also produces fewer emissions, making it better for the environment as well as passengers and pedestrians in the immediate vicinity of the vehicle.

The downside of LPG as an automotive fuel at present is the scarcity of filling stations. At the moment there are only two LPG filling points for the Johannesburg Southern Suburbs Taxi Association, for who Versus have so far converted 100 taxis.

The cost of an LPG conversion appears to be between R30,000-R40,000 per taxi. Converting them to battery electric power would most likely cost ten times that amount if I use Freedom Won's cost of converting a Land Rover to electric as a marker. This is no doubt a major obstacle and until this price drops, we are unlikely to see any taxis converted to electric propulsion.

The advantages of EV conversion would be even cheaper running costs, roughly 20% of a petrol engine, and the fact that you can put a charging point literally anywhere. Saying that, the charging infrastructure would need to be in place at taxi ranks before any EV conversions take place.

Though electric conversion would be ideal, LPG conversion is a big improvement for both the taxi operator and the environment and until EV conversion becomes practical and affordable, it seems like the right way to go.
Posted by The Swirl Guy at 10:00 PM