GM to halt India sales and sell South Africa plant
It appears any chances we have of seeing the Chevy Volt plug-in hybrid or the 380km all electric range Chevy Bolt in South Africa have been reduced to roughly zero with news that General Motors are to pull out of the country. 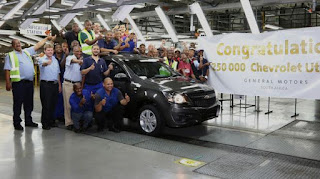 It's a major disappointment that one of the world's leading producers of plug-in vehicles should be dis-investing at a time like this. Though we haven't seen either of GM's plug-in vehicles in the country there was maybe a hope that they would introduce the Bolt as a competitor to the BMW i3 and Nissan Leaf battery electric cars, both on sale in South Africa but both with a battery range of less than half of the Bolt.
Posted by The Swirl Guy at 8:41 PM