One of the most obvious applications, in my opinion, for an electric vehicle is for courier and delivery services. As the cost of petrol or diesel no doubt accounts for a big portion of the costs for such companies, electric vehicles would generate huge savings.

Even with the raise in electricity tariffs in recent years in South Africa, it's still up to 80% cheaper to run an electric powered rather than an ICE (internal combustion engine) powered vehicle. 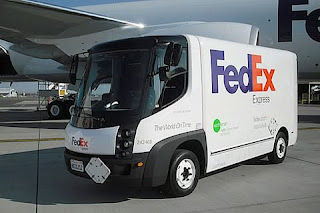 I asked a courier driver today, who does daily deliveries in and around Durban, what the usual daily mileage for the vans in his company is? He said between 250-350km. That is well beyond the capabilities of any electric van being produced now. The Nissan e-NV200 (which isn't even available in South Africa) has a range of about 170km. Not really enough for the large spread out cities we have in this country.

That range of 250-350km is though something well within the reach of some current electric vehicles. All Tesla vehicles and the Chevy Bolt have a range of greater than 350km. Many more electric vehicles, with 350km plus range, from other manufacturers are due to become avalable in the not too distant future. It shouldn't be a huge technical challenge to put a power train, capable of the same sort of 350km plus range, in a van. Seeing as there would be more space in a van, it should be quite easy to fit in a bigger battery for even greater range.

As almost all deliveries happen during regular working hours the vans would have the whole night to steadily charge without any need for any fast chargers. The driver just needs to plug his vehicle in after he gets back to the depot after his last delivery in the evening and then in the morning his van will be fully charged and ready for him.

The savings in fuel cost could actually be even greater for vehicles that spend a lot of time on busy city streets in stop-start traffic, like many delivery vans. Unlike an ICE vehicle that continues to burn fuel even while it's at a standstill, an electric vehicle doesn't draw any current from it's battery while it's stuck in a traffic jam or waiting at the traffic lights. For a commercial vehicle that is always on the road, that company would be saving money by using an electric vehicle every minute of every day.

The other benefits of course are cheaper and less frequent maintenance as well as zero emissions and much less noise to make the immediate environment more pleasant for pedestrians and cyclists.