Is It A Good Fit? Elon Musk’s New Tesla Electric Car Headed To South Africa.
Article written by Dana Sanchez in April last year for AFK Insider reported on the announcement that the Tesla Model 3 was to be made available in South Africa sometime after it's release which is scheduled for later this year. They make a comment about the Model 3's cost.


With a starting price of $35,000, the Model 3 is Tesla’s most affordable electric car to date by U.S. standards. That doesn’t make it affordable or even sensible for South Africa, where it’s considered a luxury car, ITWeb reported.

I disagree. $35,000 should equate to roughly R500,000, maybe a bit more when you take into account import taxes etc. That would put it squarely in BMW 3 series price territory, the sort of ICE (internal combustion engine) car it's designed to contend with. Compared to other electric cars available in South Africa right now, the Nissan Leaf is also about R500,000 with a 135km range compared to the Tesla Model 3's 346km predicted range. The BMW i3 is closer to R600,000, which might be closer to the price of the Model 3 when it gets here. The i3 only has a range of 160kms, less than half of the Model 3. 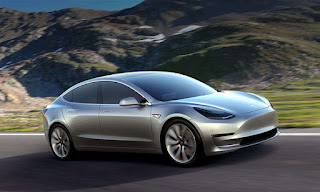 To me the Tesla Model 3 looks like pretty good value in these comparisons. Also take into account that for someone driving 30,000km a year you'd likely be saving up to R1,500 a month in fuel costs. Now for a businessman on the road, who is not regularly doing over 300km a day, that would make it a great deal more affordable to run than similarly priced cars like the BMW 3 series and Mercedes C class. Add to that,there's virtually no maintenance to be done compared to an ICE vehicle, and the saving just gets bigger.


Generally, electric cars are not a good fit for South Africa, where electricity costs are going up and infrastructure is lacking for charging electric cars, according to ITWeb.

Maybe it's time to pay less attention to what ITWeb says about electric cars. Both the BMW i3 road test from Cars.co.za, I linked to and the story I covered yeaterday about Blue Rock Village as well as other sources, give the comparison electricity cost for powering an EV (electric vehicle) as about 20% of the cost to fuel an equivalent ICE vehicle to cover the same distance.

As far as charging infrastructure goes, I've already said that we need public charging points now. The amount of charging stations has to stay ahead of the demand to use the. Just because it doesn't exist at the moment doesn't mean that it won't and indeed there are already moves underway to increase the number of charging stations in the country.

As Tesla have done in other markets, I'm pretty confident they will roll out a network of their Supercharger charging stations, once the Model 3 goes on sale here. Of course, if you are able to charge at home, a Model 3 probably won't have to visit a charging station, except on long intercity journeys.

The rest of the article continues in a fairly negative tone. As with all new game changing technologies, there's going to be resistance to the inevitable disruption. Norway has already shown us the electric revolution is already underway and like it or not the future of road travel is electric.
Posted by The Swirl Guy at 10:15 AM